Like that other Australian icon John Farnham, surfing evergreen Mark Occhilupo is on the never-ending farewell tour – which will touch down once again in Margaret River for the Drug Aware Pro which gets underway in earnest today.

Occhilupo will not be the favourite to win his third Margaret River event, but he will almost certainly be the favourite surfer in the water at one of the most prestigious World Qualifying surfing events in the world.

And that’s why the event has attracted 128 men and 60 women from more than 20 countries to compete for a prize pool of $270,000 – and also persuaded the man with a 25 year surfing career for one more crack in the unique south-west swell.

“If you win at Margaret it I really a prestigious win and really enduring. I have had a couple of wins here – and I am coming out of retirement for just one event,” Occhilupo said.

“I competed in the Australian schoolboys when I was 14 and fell in love with the place then.

“This time I have brought my wife and my two boys and will probably be visiting a few wineries and send a couple of cases home.

“I just love surfing there – and this was as an offer I could not refuse. Deep down it is the competition probably crave. I am retired … officially I have retired I think, but here I am again.”

Decent but not enormous swells are predicted for the week of competition, which will also include local WA favourites Jake Paterson and Claire Bevilacqua.

Paterson, born and bred in the Yallingup surf but now resident in Bali, said:

“It is great to see Occy back, great for the sport – and Margaret River is probably our best chance (for the old guys) these days,” Paterson said.

“There is more of an open wave and not so much aerial manouveres. And getting into the water in Margaret River is like riding a bike … it will take a little bit of getting used to but it will be fine.”

One day one of competition on Monday, the trialists for the men’s event were decided, North Stradbroke’s Lincoln Taylor, Hira Teraniitoofa from Tahiti, Jay Davies from Yallingup and Manuel Selman from Chile) earning berths in the main event.

17-year old Hawaiian Carissa Moore blew her competition out of the water, with an 8.00 and 6.35 in the first round women’s heat mid-morning.

And City Beach’s Bevilacqua made it safely through her first round heat in deteriorating conditions. 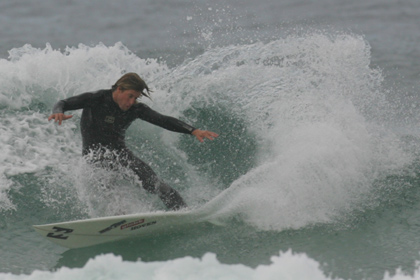