Here at the Margaret River Discovery Company we regularly have the privilege of hosting celebrities and journalists alike. Below are some of the great articles that people have written about us.

Like what you have read? Come join us and write your own memory.

Discovering people and places in the Margaret River area that a visitor would never find on their own is the philosophy behind Sean Blocksidge’s 4WD tours and he has a knowledge of the more out-of-the-way tracks, trails, waterfalls and up-and-coming wine estates that is second to none. His experience running a five-star hotel and managing a winery means that his knowledge of wines generally, and Margaret River wines in particular, rivals that of many producers and it’s hardly surprising that his choice of the best estates to visit – from more than 100 wineries in the region – are sure-fire winners.

The Rough Guide has given us glowing recommendation in their latest Australia /Margaret River guidebook. We’ll let the page speak for itself! 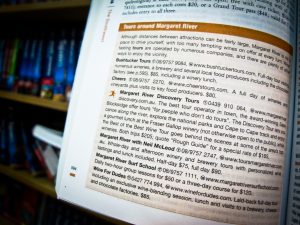 The Margaret River Discovery Company gives you the chance to do something 90 percent of the locals haven’t done – canoe the actual Margaret River. Together with fine food and wine it’s a real David Attenborough meets Jamie Oliver experience.

Australia is our neighbour, staunchest ally, fiercest rival. Like many Kiwis I’ve travelled there, but only to the east coast, Sydney, Melbourne, the Gold Coast. I’ve often thought, I’ll leave Australia till last on my travel plans, because its close and its pretty much like New Zealand, it just has a few more gumtrees and a lot more desert.

I’ve been on a journey of discovery across the ditch.

Sean Blocksidge has become a bit of a local legend for his Margaret River Discovery tours. He’s a good man who doesn’t take himself too seriously, but seems to know whoever and whatever needs to be known around the place.

He’s a bit of a renaissance bloke, too. He caters the lunch, does the commentary, driving and cleaning up, yarns about local history, shares his photos from the local bush fires, spots interesting birdlife, tells horror stories of mates’ surfing mishaps and pokes a bit of gentle borax at the Kiwi in the group as only an Aussie can.

TWELVE treats, handpicked from the country’s trove of nature and culture, highlight the rich store that lies in wait for adventurers at home.

These are some of the priceless experiences our states and territories have to offer.

Today was one of those idyllic days that travel is, in an ideal world, all about. Leaving Nannup and heading back towards civilization around 8am the sun was already beating hard enough through the windscreen that air con was needed and there was not an airplane trail, let alone a cloud, in the sky.

While many wine-growing regions claim to have it all, Western Australia’s Margaret River really does. As wine guru Jancis Robinson puts it: “Margaret River is the closest thing to paradise of any wine region I have visited.”

If there’s one place you can rely on for good weather, according to almost everyone I meet while there, it’s Western Australia’s Margaret River region.

It sounds like distant cannon fire, but a quick glance towards the Indian Ocean confirms the noise is coming from the gigantic creatures who give these waters their nickname: the Humpback Highway.

Wanting to get quickly beneath the region’s skin I book on to Sean Blocksidge’s Discovery Tour, voted the region’s top tour by Trip Advisor. Laid-back but intensely knowledgeable, Blocksidge is the perfect local to unlock the secrets of this exquisite corner of Australia.

Margaret River WA was originally a chilled out surfie town, but has evolved into the ultimate smorgasbord of fine wine, good food and spectacular scenery — just a three-and-a-half hour drive south of Perth. No trip to Western Australia is complete without a pit stop at Margaret River.
There’s a fine supply of world-class wineries, boutique breweries, and restaurants overlooking sweeping vineyards and surf breaks.

The wine is definitely top notch – the region produces less than one per cent of Australian wine, but wait for it – over 15 per cent of the country’s premium wine.

And with 60 plus wineries to choose from, you won’t be stuck for choice.

One of the best ways to experience the wine that Margaret River has to offer is on a tour.

This video features a tour with the The Margaret River Discovery Company hosted by expert local guide Sean Blocksidge. Armed with a luxury 4WD plus a boat he plots a journey that takes you behind the tourist facade, away from the masses to discover people and places you won’t find on your own.

The aim is to give the traveller the most memorable wine touring experience ever, and in the process, really experience the richness and diversity of this unique corner of the world.

The air was clear, the stars were out en masse, and the temperature was divine – neither too hot nor too cold.

“One of the absolute must-dos is canoeing the Margaret River,” says Sean Blocksidge of the Margaret River Discovery Co. “It’s a stunningly beautiful river system that meanders up through paperbark trees and has abundant fish just below the surface.” Margaret River is a destination that seduces beachgoers, nature lovers, adventure seekers and foodies alike. And lest we forget, it’s possible to cap each day with a refreshing glass of wine.

Not Quite Nigella July 2011

“So who here is afraid of water, heights, spiders or snakes?” our guide Sean from the Margaret River Wine & Discovery Tour Co. asks our group.

I raise a finger gingerly. “Is there a biking component because you’ve just listed all the things that I can’t do except for bike riding”. He is not joking. I am clearly going to be out of my depth today.

Western Australia’s coastal route offers the adventure of the outback – but with much better wine.

I have never had much luck with canoes. It’s a balance thing and my excuse is that I’m genetically challenged when it comes to this activity.

You see, I have short legs and a long body, which means the centre of gravity is all wrong and I tend to tip canoes over rather than successfully navigate them upstream, or downstream for that matter.

The Golden Guide to Margaret River

Three years ago, Sean Blocksidge was on a mission that looked doomed to failure.

He’d just started the Margaret River Discovery Company, determined it would stand out from the plethora of tours of the world-famous wine region

“There were plenty of tours bussing people from winery to winery,” Sean says. “I wanted to do more than that, I wanted to take people behind the scenes and to places some of the locals don’t even know. I wanted to show there is more to Margaret River than wine…..

Sean Blocksidge stepped out of the corporate world three years ago to boldly launch The Margaret River Discovery Company, with a mission to help visitors discover the “real” Margaret River. He rolls up to my accommodation in a shiny 4WD vehicle with a broad smile on his face and calmly tells me he was voted Western Australia’s Top Tour Guide at an award ceremony the previous evening. We begin the day with a serene paddle on the river under overhanging paperbark trees. The scene is so tranquil that the marron, brim and mullet are resting on the bottom in a languid state and dragonflies are hovering in the heat haze. Sean explains that this is just an appetiser, as we are going behind the scenes at Cape Mentelle vineyard for alight degustation lunch …..

From a vantage point on the wild Wilyabrup cliffs (part of the regions accessible Cape to Cape hiking trail), Sean Blocksidge once beheld a great white shark launching out of the water below, feeding on salmon. “There’s much more to Margaret River than just wines”, said Blocksidge as he picked us up in his comfy 4WD for a day’s guided tour. By the time we finished – on those selfsame cliffs, with a view so big I swear I could see the horizon curve – we quite believed him.

The Robb Report Singapore May 2009

A more adventurous, but also ultra exclusive tour is run by Sean Blocksidge and his business The Margaret River Discovery Company.

Like so many people, we met in Margaret River, Sean has an interesting background. He was the general manager of a five star hotel, and formerly cellar door manager of Voyager Estate. Sean jokingly describes his tour as “Al Gore meets Jamie Oliver” but it’s more than that—a truly unique experience. Like Nola, Sean can tailor the tour to suit you; this was his ‘Margaret River Discovery Tour’.

Sean met us in his luxury 4WD, and on the way to our first destination while black cockatoos flew overhead, he spoke of the area’s history—aboriginal and European, as well as the ecology, geology and climate of Margaret River.

Sean is very passionate about the area: he is a volunteer for the local fire service, and that passion comes through. It’s not a boring geography lesson, just a fascinating chat with a good bloke. The first stop was canoeing the Margaret River. Now as a canoeist, canoodler…er, someone who canoes, I make a very good writer but my nautical navigation skills need some work—however, this was a serene, pleasurable experience, gently paddling down the tranquil, glassy river, navigating the meandering turns.

While Sean casually pointed out native flora and fauna, I (most of the time) evaded obstacles. Back on dry land and after a much-needed coffee, we headed off-road, down narrow bush tracks that only he has access to—again that exclusivity. Sean took us on a walk through the bush and explained the history of the Wardandi people, the original custodians of the area. We explored the beautiful Meekadarabee Waterfall—a dreamtime site that has great significance to the aboriginal people. In establishing his company, Sean wanted to create a unique experience that wasn’t being offered elsewhere, he also worked with Australia’s National Trust, the Wardandi people and winemakers including Fraser Gallop Estate, which happened to be our lunch destination.

Sitting in their barrel room over a gourmet lunch that Sean magically produced and several glasses of the barrel’s contents, we chatted with Fraser Gallop’s award-winning winemaker Clive Otto, one very easygoing guy—you get a lot of that here. Fraser Gallop is a magnificent property, but there is no cellar door, so if you’re not on Sean’s tour, access would be virtually impossible.

Sean’s objective is to offer his guests a truly unique insight into the numerous aspects of the region. And he achieves this effortlessly through his professional approach. We covered everything from getting up close and personal with the Margaret River herself to off-roading through the bush. We were fortunate to see wild kangaroos alomng the way plus some other wildlife.  For me though, a particular highlight was our time at the exclusive Fraser Gallop vineyard. ……it was a memorable indulgence. Sean has created tours that are exceptionally well-designed with a real difference. And with all the unexpected aspects along the way it made for an outstanding day.

“His enthusiasm is infectious as he drives us through rolling green countryside and down a bumpy farm track past a  mob of  big kangaroos sprawled in the shade to the Margaret River.  He pushes a green canoe out under the flaking paperbarks and we glide along the still river between thickly wooded banks. Kookaburra calls echo through the trees, wild bees hum, lampreys flit through the green water. It’s blissfully relaxing.” 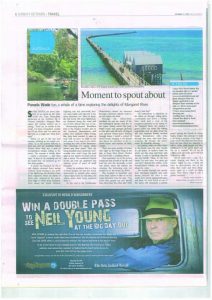