As the newly-married “Mrs Margaret River Discovery Tours” and the organiser of our big (little) day in Margaret River, Sean asked me to write a piece on down south weddings.

Sean and I are a couple of global explorers, so we really did feel like we had the world at our fingertips when we planned our wedding. We were ready to elope to the furthest lands for a memorable day. But when I looked at our ideal wedding – an intimate ceremony in a beautiful outdoor setting, followed by a special meal – we knew it would be hard to beat the South West as a wedding venue.

Once we were set on the country/region, we moved on to the big decisions of date and ceremony location. The Margaret River wedding season runs from Spring to early Autumn – that’s about November to April. It’s supposed to avoid the grey drizzle of winter but more than one March wedding has seen storms and rain, so a summer date is no guarantee of good weather. We threw caution to the wind and chose a mid-winter date. At worst we knew to expect rain, but I hoped for one of the bright, crisp winter days that the south west so regularly turns on. Although it pelted down the day before our wedding and drizzled a bit while we got ready in the morning, the skies were bright and clear for our ceremony and photos. Which is a good thing because we had chosen an outdoor setting…

We really do have it all down here – there are some really quaint old buildings and chapels for those who prefer indoor or church weddings. There’s also plenty of private garden venues – formal and rustic – that specialise in weddings. But for us the region is all about the outdoors and there are so many  picturesque rivers, tall timbered forests and pristine beaches where you could host a ceremony or take photos. By limiting our guest list to nine (yes, nine, not ninety to the bemusement of our friends) we opened up so many options of venue. It was always going to be hard to top our engagement (Sean proposed while we were hanging from abseiling ropes on the Wilyabrup cliffs with the Margaret River Climbing Co ). But I had a picture in my head of an intimate ceremony under the breathtaking leafy canopy of the Boranup Forest karri trees.

For a wedding that size we didn’t need any stylists or wedding planners. And, besides, we had chosen the forest for its natural beauty and I was happy to let that be the star. Keeping with our minimal theme, we borrowed some chairs from a friend’s winery and mum’s hall table became our signing table. A few timber fruit crates filled with flowers completed the ‘styling’.

Our dear friend Donna Joy  from Marry Me Down South was our celebrant, Libby from Libby-Jean Designs was an absolute superstar with my hair and makeup, Dean from Funky Flora went to an amazing effort importing flowers in the off-season to get me my ‘messy’ bouquet, and the amazing Freedom Garvey from Freedom Garvey Images captured the day in the most stunningly beautiful images (including the feature picture). I am also indebted to the team at Hobnob Bridal in Perth, who saved the day with an off-the-rack dress six weeks before the wedding after my original Lisa Ho met a brutal end via some dressmaker’s scissors.

I didn’t want a lot of fuss and simplicity was hugely important for both the bride and groom so it was great that my brothers-in-law stepped in, one as a driver, and the other to run the music (thankyou Apple Ipod) for the ceremony. But if you don’t have awesome brothers-in-law (sorry I can’t lend you mine) there are plenty of professionals in the region who offer these services and the Margaret River Bride and Groom Wedding guide should be your go-to encyclopedia for all things wedding in and around Margaret River (you should also check out the Festival of Love each year in September).

I wouldn’t change a second of our day. Being such a small wedding, we could have changed the venue or held the ceremony off an hour if the weather had been too awful, but the weather worked out fine in the end. And lunch at Leeuwin Estate for all the guests followed by dinner at Cape Lodge was an amazing way to end the day, and start married life. 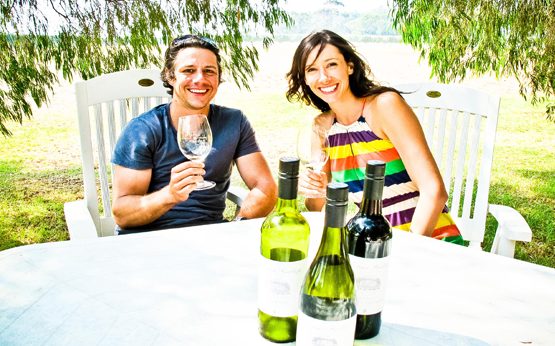 Well, Autumn is well and truly upon us and what an amazing …