Aussies are hoarding their holidays in the financial downturn, but the federal government wants them to take a break in their own backyard to boost the economy.

Tourism Minister Martin Ferguson will launch a campaign today to encourage Australians to use some of their 123 million days of accrued leave to holiday in their own nation. He wants people to consider using the $900 in stimulus payments that will go to low- and middle-income taxpayers next week on a domestic holiday, to further benefit the economy.

“This campaign is about Australians getting behind the thousands of small businesses and the half a million jobs that are supported by our home-grown tourism industry,” Mr Ferguson said in a statement. “In these difficult times, I hope all Australians will stop and think what they can do to kick our economy along and help keep the jobs of their fellow Australians – and a great Aussie holiday is a great start.”

Sounds good me! We look forward to welcoming more Aussies to Margaret River … and be sure to check out the The Margaret River Discovery Company in the promotional campaign. 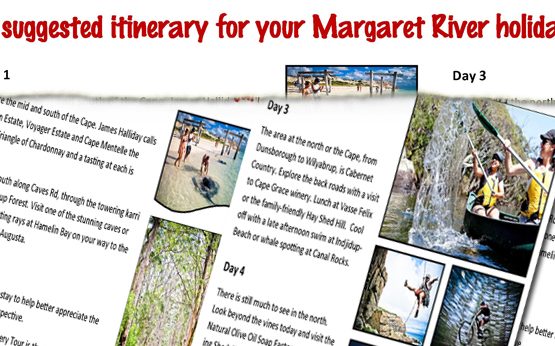 A suggested itinerary for your holiday in Margaret River