by Hayley Thompson from Perth Times

As he prepared for last night’s concert, Isaak was his usual self-deprecating, jocular self. Even when doing a soundcheck, Isaak couldn’t help clowning around.

But behind the wit, you could tell that a perfectionist lurks.

It was the first time the bluesy rock ‘n’ roll crooner had been at the Leeuwin Estate winery, which is celebrating a quarter of a century of concerts against what must be one of world’s most picturesque backdrops — the tall karri trees of Margaret River.

Isaak, 52, who has visited WA twice in recent years, was a popular choice for the concert — his singing, humour and charm have audiences eating out of his hand.

He brought with him his faithful band of 25 years, Silvertone.

Large numbers of fans camped out overnight on Friday to take prime positions in the grassy amphitheatre.

While many concertgoers got the full VIP treatment from the estate’s elegant black-tie marquee, others were content to slum it on blankets, armed with mosquito repellent and a bottle or two of the vineyard’s finest.

It seems word has got out about the Margaret River event, with people flying in from Japan, Singapore and the eastern states for the spectacle.

During the two-day concert about 7500 bottles of wine will be polished off, though Isaak won’t imbibe.

“I’m not a drinker,” he told The Sunday Times. “I’m the rock ‘n’ roll musician who never smoked pot and never gets drunk — it gives me a lot of energy to do other bad things.” 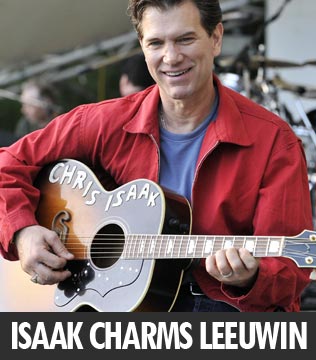 Sexy crooner Chris Isaak will perform the at the 25th Leeuwin Concert.…

Described as the most extraordinary concerts ever held in Australia, the annual …