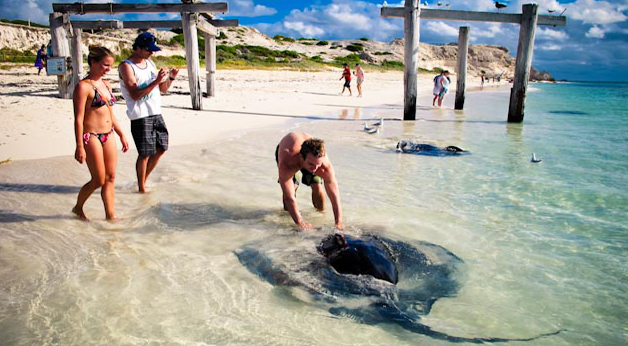 The regulations identify a protection zone in the area where stingrays and skates (members of the Superorder Batoidea family) cannot be fished or harmed.

Fisheries Minister Norman Moore said he had called for community and stakeholder consultation, following an incident last year in which a well-known eagle ray, called ‘Stumpy’, had been legally caught and killed by a recreational spear fisher.

“While the fisher had done nothing illegal, the action created great concern among locals and tourists, including young children, who witnessed the incident,” Mr Moore said.

“The incident raised significant public concern that the species should be protected for conservation and observation.

“Given the need to protect the tourist attraction stingrays provide in Hamelin Bay, I agreed to change fishing regulations to ensure rays and skates cannot be taken within a defined area.”

The specified protection area incorporates locations where locals and tourists often interact with the rays.

Rays or skates accidentally caught by recreational fishers within the protection area would need to be released immediately without being harmed.

Existing penalties for taking protected species would apply to any fishers breaching the new regulations within the area. The maximum penalty for taking totally protected fish is $5,000.

The Minister said the new regulations and protection zone would enable fishers to still enjoy Hamelin Bay while locals would be assured the wild rays would continue to be an attraction.

“I appreciate the support Recfishwest and the Western Australian Fishing Industry Council have given to this solution,” he said.

Mr Moore said it was important that people understood rays were wild animals, which had the capacity to inflict a serious sting injury, and reminded visitors to pay attention to signs asking them to not feed the rays or skates; and to be aware of the risks when interacting with rays.

Surviving whales disappear out to sea

By Michelle Bennet from the West Australian

Only the size of a …