Pruning is the focus within Margaret River vineyards at present and will continue into August until budburst starts to occur. As we drive around the region we see individuals and teams out in the cold and rain toiling away to set the crop for the next vintage. We need to spare some thought for these people as many are back-packers and as we are currently experiencing the wettest July for many years, it could be easy to see why they wouldn’t want to be anywhere else than out there pruning. We are fortunate that we have contractors and individuals that have dedicated themselves towards providing pruning service to the vineyards, as this is by far the busiest time in the vineyard and with short daylight hours, time is of the essence in larger vineyards.

Pruning is generally described as the removal of canes, shoots, leaves and other vegetative parts of the vine. The reasons for pruning are to establish and maintain vines in a desired shape that will improve productivity and enable various cultural practices such as fruit thinning, harvesting, and pest and disease control. Correct pruning will distribute the proper amount of wood and buds over the vine and between vines according to vine capacity so that large crops of high quality fruit can be maintained over the years. Fundamentally, pruning regulates the amount of crop to lessen the need for fruit thinning. Pruning is the preferred method for crop yield control on grapevines and thereby increases the foliage-to-fruit ratio.

There are two main pruning methods undertaken in Margaret River and much opinion as to the positives and negatives of each method still occur in vineyards today.

Cane pruning is a specialized pruning method in which new canes (of about 10 buds) are left each season. A skilled cane pruner will assess each vine prior to pruning and regulate the retained buds based on the previous performance of the vine. Ideally each vine is assessed and pruned and replacement spurs retained to give opportunity for new canes in desirable positions for future years. A good cane pruner is a sleuth looking at past history and making decisions that will influence the balance between buds retained and the canopy to fruit ratio desired. A good cane pruner will leave opportunities to make cane pruning easier in following years. Cane pruning is recommended for small clustered varieties such as Chardonnay, Cabernet Sauvignon and Sauvignon Blanc. Cane pruning is suited to varieties whose basal buds are not fruitful or of low fertility. The greatest issue faced with cane pruned vines is finding skilled pruners to undertake the task that generally results in cost inefficiencies due to lack of pruning wood opportunities in future years, which in turn slows the pruning process. The costs are increased further due to lack of mechanization in removal of pruned material and the need to tie the remaining canes to the fruiting wire. Tying is done to secure the canes and provide support form the vine and crop on the trellis.

Spur pruning, sometimes known as Cordon Trained involves leaving permanent fruiting wood structure and pruning to retain the desired number of 2-bud (spurs) to distribute canopy and fruit evenly along the length of the vine row. The pruning operation is made easier with the use of mechanical pre-pruning machines that cut most of the shoots to near length and remove the cut material from the vine trellis. The pruner can be somewhat less skilled, as the spacing of spurs may have been predetermined in previous years or direction given to leave a space of 100 – 150mm between each spur. In any event, most new spur pruners will pick up the method quickly and achieve a reasonable result for the owner. 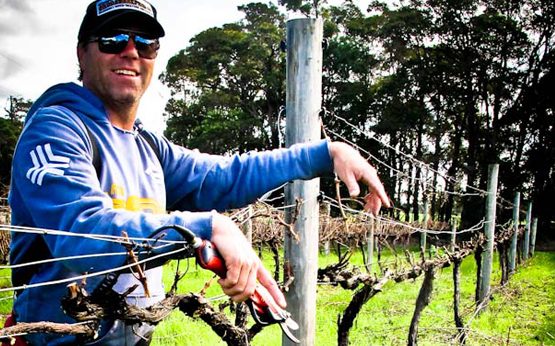