I always look forward to seasonal vineyard updates from Bruce Pearce. This is one is cracker. If you are a wine or vine nerd enjoy ….

The Margaret River wine region covers two shires (Busselton and Augusta – Margaret River) and is approximately 100km long and 27km wide. We are a large wine region that is influenced by the Southern and Indian Oceans. The Southern Ocean influence results in the southern vineyards having a somewhat cooler temperature profile and as we move further north the Indian Ocean influence kicks in and the climate warms. Over many years of viticulture excellence we understand and work with the variation in climate from south to north of the Margaret River wine region. Fortunately we are having a great growing season here in Margaret River and the spread of climatic variation adds to the complexity and depth of wines produced. As fate would have it, Margaret River had missed a lot of the inclement weather that occurred in the north and the southern areas of the state. Our geographic location has put us in a solid viticultural position again for vintage 2012…..

What we didn’t miss though was the fire that caused havoc and loss of property along the coastal mid section of the region. Thank goodness no one was injured. A couple of vines scorched and a lot of smoke that fortunately occurred at a time when vines would be least susceptible. With much of the smoke rising over southern vineyards and passing out to sea, the vineyards are OK. Unfortunately, a lot of lost hours worrying and fighting a fire and a few local mates that will need to rebuild and start over again…. mates with families that work in and around our wine industry! The strength of our local community spirit is working to help these families through and we appreciate the kind donations from Wine Lovers.

This year Margaret River wine region had a reasonably normal start to spring but with a wetter November than recent averages would suggest. The result has been earlier season vigour and a sprint for vineyard managers and viticulturists keeping up with canopy performance targets. One viticulturist recognised for his dedication to growing grapes and meeting targets is Bart Molony. Bart is with Vasse Felix and recently was awarded the prestigious Margaret River Wine Industry Association – Viticulture Excellence Award… Well done Bart!! (I have had the pleasure of working with Bart at Vasse Felix for a few years now!). Its guys like Bart that will ensure our drinking pleasure for years to come!

Viticulturists are enjoying grape vines growing actively from budbreak until flowering, this is positive for canopy surface area to fruit yield ratios and also fruitfulness for next years crop. We know that buds formed when active shoot growth occurs are more fruitful and the practices applied to encourage strong early season growth start in the previous year. By having strong early season growth we use the natural reduction in soil surface moisture taken up by the vines to encourage mild moisture stress in the surface root zone of the grape vine. This in turn slows shoot growth through the fruitset to bunch closure period and then hopefully will allow cessation of shoot growth at approximately 10 to 20 days before veraison (veraison is the period where berry colour change or softening occurs). This is exactly how we like our red variety vines to be leading into the fruit maturation period. We know that our red varieties have the best quality fruit when mild moisture stress occurs prior to veraison and harvest. As the surface root system dries, there is a change in the chemicals/hormones produced by the roots and this signals the vine to change from shoot growth to reproduction (berries with ripe seeds). The result is berries that have more colour, flavour and aroma… all natural attributes for a plant trying to promote seed dispersal. Vine health is maintained with the deep penetration roots that have accessed moisture in clay at depth, supplying the moisture for natural vine function.

We have put considerable effort into getting soils correct in nutrition and health and this also results in managing readily available soil moisture naturally and reduces the need for supplementary irrigation. It does go without saying (but I will anyway!), we do assess our vineyard soils and vine performance leading into flowering and veraison and if necessary we can apply supplementary irrigation to protect flowering and the berry maturation period. This is viticultural excellence at its best!

Pasture and cover crop growth in mid-rows this spring has been phenomenal and as a result the future of soil health and vine performance is looking very promising. Timing will see most vineyards complete canopy and fruit zone management by late December and we are hoping for some fine and mild weather through the next 3 months to ripen grapes. We forecast the 2012 vintage starting mid February…. it’s shaping up to be a ripper!

An amazing period to be out in the vineyard and we hope that all wine lovers have a merry Christmas and prosperous New Year.

More Photos of the Day

Margaret River Picture of The Day May 2012

Out in the Margaret River vineyards Summer 2010 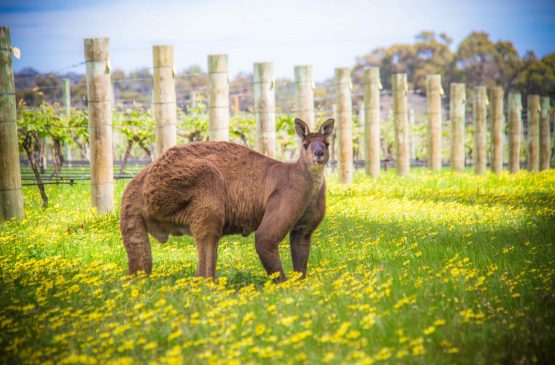 Out in the Vineyards Summer 2016