Many vineyards in the Margaret River wine region are completing pruning and are now starting to manage the weeds and other plants that have germinated and grown through winter. It’s important to understand that every plant that is not a vine is not necessarily a weed and that in many vineyards there is a lot of effort put into establishing desirable mixtures of selected grasses and legumes to cover the soil surface. The intention is to move into biodiversity by encouraging many different plants, albeit selected species.

Rye grass would be the prominent grass species grown and it is quite common to have a mixture of annual and perennial rye present in pastures. There are many other grasses that will be found and much depends on the soil type and previous cultural practices undertaken in the vineyard. Legumes are usually found as subterranean clovers, annual clovers, medics, and the ubiquitous lotus minor/major found in summer wet areas. The importance of legumes in the vineyard pasture is that these plants have the ability to fix nitrogen absorbed from the air into the roots and generally have foliage that is much higher in protein. The symbiotic relationship between rhyzobia bacteria within the root system of the plant, the presence of adequate molybdenum trace element in the soil will enable the formation of nodules containing nitrogen compounds in the roots. Eventually when the plant dies and breaks down (as part of the organic cycle) this nitrogen and other plant available nutrients enhances the soil and provides future generations of plants with readily available nutrition.

There are many reasons for controlling weeds and some smart management and early intervention can reduce the grief of trying to control problem weeds into the future. Many times we have hand pulled weeds to reduce seed set on individual plants and simply eliminated the necessity to control the thousands of plants that could eventuate from seed dispersion from that single plant. We recognise the benefit that running sheep in the vineyard during the winter months to graze off the larger broadleaf weeds which in turn also reduces seed set. Sheep grazing restricts the performance and growth of large dominating species such as Cape weed. Cape weed if left unchecked will smother out clover and grasses and become a monoculture which dries very quickly in summer to leave bare ground. By reducing Cape weed we can also start to reduce the severity of Garden Weevil, a destructive pest that chews the new shoots and then fruit on the vine. The grubs of the weevil will munch on the root system of Cape weed (interestingly, both Garden Weevil and Cape weed are introduced pests from South Africa), the grubs develop into adults and emerge from the ground to munch on the Cape weed foliage and as the foliage dries off, the weevils move across into the vines. By reducing Cape weed, we can reduce the severity of Garden Weevil.

Most growers traditionally would keep the area directly below the vine free from vegetation, as this is thought to reduce competition on the vine for nutrients and moisture. There is also good reason to reduce the risk that summer fire could bring by removing the fuel load and helping protect the vine from destructive heat or loss of trellis and irrigation in the unfortunate event of a fire. Some growers now prefer to let the pasture grow under vine and then control the height of the sod by applying a selective herbicide spray early in summer or simply mowing and mulching to reduce the height. There are other methods using gas flames and hot water/steam that have been evaluated for weed control and provide some benefit. The most interesting innovation seen recently is the use of near infra-red sensing to distinguish green plants from bare ground and to only apply chemical to the plant, a major step forward for many reasons including the environment.

Of course we can also use cultivation undervine to control weeds and many of the older generation of growers will recall using horse and plough followed by hours of hand hoeing or maybe the more modern tractor mounted undervine moldboard weeder, both which require skill and considerable stamina to use but provided a method of controlling weeds and keeping the growth of plants undervine in check. 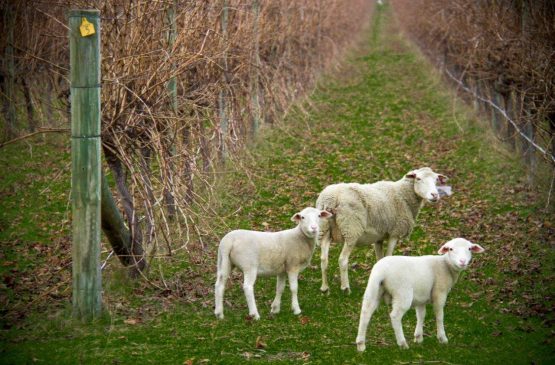