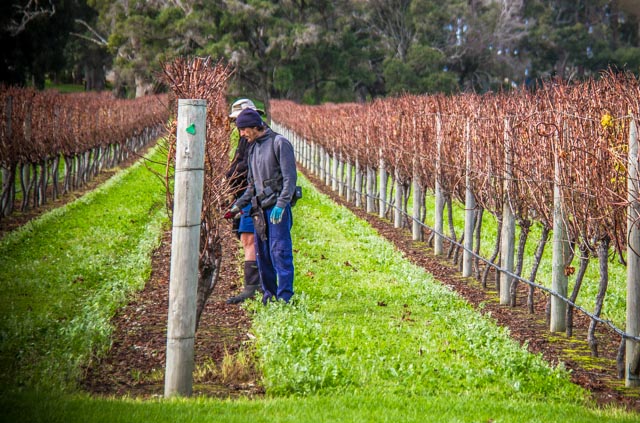 Finally winter has arrived in Margaret River and with shorter daylight hours, cold weather and rainfall the grapevines respond with late autumn colours and leaf loss. The start of the dormant period in the cycle of vine life has begun.

Grapevines are very robust plants and have evolved over millions of years to survive harsh winters by losing their leaves and shutting down their metabolic processes. Dormancy is really the winter survival behavior of vines grown in temperate areas. Towards the end of the growing season as daylight hours shorten in autumn, vines lose their leaves. As temperatures further decrease, the vines undergo a number of changes in preparation for ‘shutting down’ for the colder months. Levels of water held within the plant tissues decrease, soluble proteins and carbohydrates in bark increase and cell membranes alter their function so that basically the vines set themselves up with the biological equivalent of ‘anti-freeze’ to ensure live tissue remains for the renewal of growth in the following spring.

Vines are not dead or completely inactive when dormant. They do not photosynthesize as they have no green leaves, but they are breathing to maintain basic metabolic functions. Their energy source at this stage is carbohydrates stored during the late part of the growing season.

An interesting fact with dormant vines is that the vines actually move carbohydrate from the external part of the plant back down into the trunk and root system to protect the vine in the event that severe frost or freezing should damage the above ground structure of the vine. This is important, as to take cuttings for propagation later into dormancy could result in poor carbohydrate levels and therefore less success in the nursery or grafting environment. To prune early could result in removing carbohydrate and lessen the effective bud-break potential and reduce early spring shoot growth. Of course pruning early could be a management tool if we needed to control excessive vigour, simply by removing more carbohydrate earlier from the vine.

Many growers now use bud dissection as a tool prior to pruning to determine the fruitfulness potential of retained buds and to help support the decisions made with bud selection at pruning. This is by no means an exact science but simply a tool that allows another set of information to help predict an outcome. Bud dissection requires the grower to supply a representative sample of the buds that could be left after pruning. These buds are dissected and observed under a microscope. Assessments are made for bud health (is the bud still alive), pests (vine mite can be found in the buds) and then the microscopic flower cluster primordia from the primary bud can be counted.

After dissecting bud samples and documenting information, a prediction of yield for respective blocks can be made. We understand that there are many variables that will affect the final yield at harvest and that bud dissection is simply another tool to help with predicting a suitable ratio between fruit weight and canopy size; the long term goal being to improve wine quality. Out in the vineyard today with a few hardy souls and sharpening my secateurs in preparation for my first days pruning. Cold and wet today and rugged up with my rubber boots tucked under the waterproof pants.

Music loaded onto the phone and headset on will help pass the time. The first of around 20 days of pruning for the season and looking forward to a glass of Margaret river Cabernet tonight in front of the fire at home tonight. Looking forward to some fine weather forecast for early next week and some relief from the cold. One days pruning done and cheers from out in the vineyard!