How to find the Natural Spa in the Margaret River?

Ok so let me say straight up I am very hesitant to post this information.  The Natural Spa used to be a bit of a locals secret, but thanks to social media it has now become one of our leading natural attractions in the Margaret River region.

On the one hand it’s awesome to see so many people connecting with nature.  On the other hand there is a small minority that have to stuff it up for others, leaving rubbish and undertaking dangerous activities on the surrounding rocks that are resulting in rescues and drowning’s.

There are also a lot of people getting lost trying to find it as a result of purposefully incorrect information posted on google.

So here are some simple directions. And a few suggestions on how to engage with this special area.

Firstly lets just say this is natural attraction. It deserves respect.  The ‘leave no trace’ principle needs to be your priority when visiting this area.

Occasionally some fuckmuppet will leave behind their beer cans and stinking aroma of arrogance.  Feel free to pick up their rubbish and throw it back at their head.  Or more honourably pick up more rubbish than you came in with. Score tripledouble positive karma points. 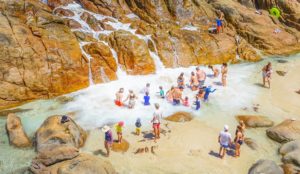 So how to find the Natural Spa?  To be honest the place is pretty easy to find.  It’s kinda remarkable that only a few people knew it before social media.  Only ten years ago you’d have needed to know a long time local before they would share the location.   But for better or worse here it is  …..

Drive west down Wyadup Rd (on the north end of Caves Rd).   As you come over the ridge toward the ocean you will be confronted with epic views.   One of the most beautiful beaches in the region is to the left – Indjidup Beach.

You need to continue on Wyadup Rd toward all the granite rocks. Be careful on this bit of road for oncoming cars. It’s narrow with a tight corner and the distraction of scenery. Go all the way to the end, then park in the gravel car park.   There are no signs about the Natural Spa. But you are warm and getting warmer to finding the location.

Get out the car and follow a well-worn sand track to the left (south).   Keep walking for about a 100 metres as it winds around to the west.  And you are there!

I always recommend sitting and watch and wait for about 10-15 minutes before getting in.    Try and get an idea of how regular and how big the wave blasts can be.   On big wave days it can be a dangerous as waves explode through the gap.  The surrounding rocks get super slippery and people are regularly having serious accidents, lots of kids breaking bones and several requiring hazardous rescues.  People have drowned in recent years on the exposed side of the rocks.

There are some great picture opportunities on the safer and drier north side of the rocks looking down on the ‘spa’. 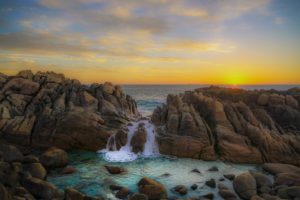 Have fun. Stay safe. Pack out what you pack in.  It’s an AWESOME location!

And if you want to find a few more special local secrets. Off the grid. Off the map.  Check out the Margaret River Discovery Tour while you are in town.  We’ll take you places even more special than the Natural Spa.

Surfed a few weeks ago at a … 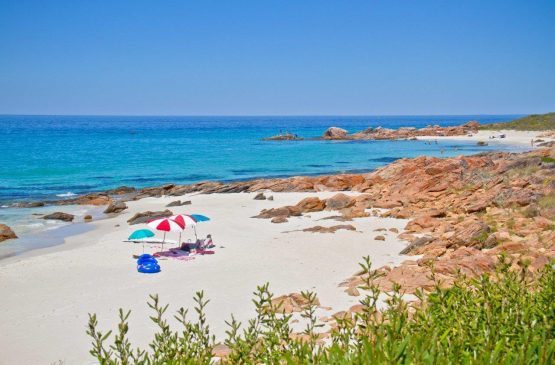