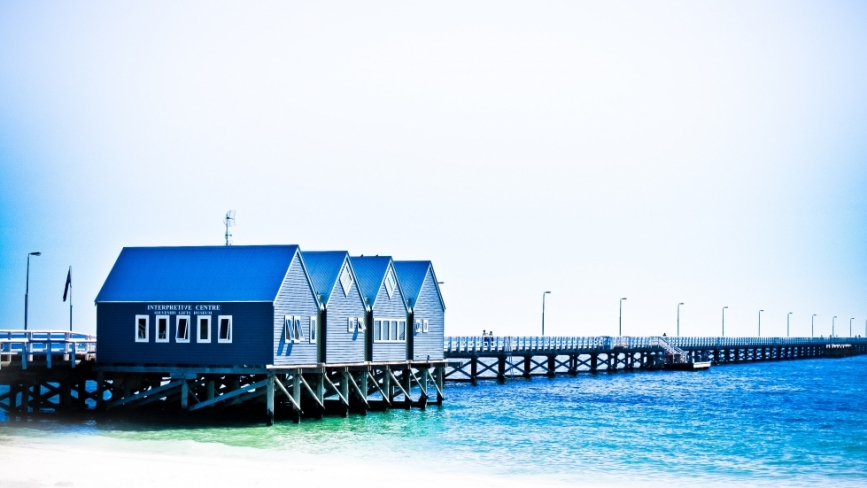 Stretching 1.8 kilometres across Geographe Bay, Busselton Jetty is the longest timber-piled jetty in the Southern Hemisphere. It is appreciated for its spectacular Underwater Observatory, Jetty Train and myriad of recreational uses. A unique experience situated in Western Australia’s favourite playground!

The Busselton Jetty reopened  after completion of a $27 million refurbishment programme. New features include interpretive nodes and fish cleaning bays. Swimming and diving platforms, rain shelters and heritage sculptures are also present along the new structure. Most importantly, visitors are once again able to travel by train to the Underwater Observatory where the depths of Geographe Bay are waiting to be discovered.

The 145-year-old Busselton Jetty, measured at 1841 metres, is the longest timber-piled jetty in the southern hemisphere and today is one of Australia’s most unique eco-tourism sites.

Just two hours drive south of Perth, the seaside resort town of Busselton is situated at the northern gateway to the Margaret River Wine Region. The Busselton Jetty attracts over 400,000 visitors a year and is the most popular tourist attraction in the South West region. It is an ideal starting point for any visit to the South West Capes.

The Busselton Jetty Underwater Observatory, with more than 300 individual marine species, is host to an awe inspiring “forest” of vividly-coloured tropical and sub-tropical corals, sponges, fish and invertebrates. It is described as Australia’s greatest artificial reef.

Each year during autumn and winter, the Leeuwin Current brings a narrow band of warm water down the Western Australian coastline. This warm southerly current is responsible for the incredibly diverse array of tropical and sub-tropical species in Geographe Bay including coral growth at a latitude of 33 degrees south. The west coasts of other southern hemisphere continents such as Africa and South America have no coral growth below 5 degrees south.

It can accommodate up to 40 people at one time. Descending 8 metres below sea level, visitors can view the amazing corals and fish life through eleven viewing windows, at various levels within a 9.5 metre diameter observation chamber. A lift within the observatory also enables wheelchair bound people to have access to one of Western Australia’s unique natural wonders.

Check out www.busseltonjetty.com.au/  for more details.